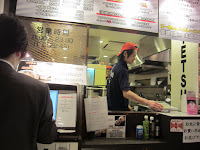 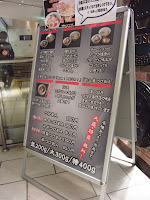 There are 3 ramen shops in this alley thats located off the Hibiya-line (basement level) of Roppongi Hills and Tsuke-men Tetsu is the only spot with a consistent line every time I walk past. 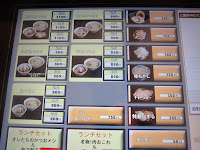 So I just had to give it a go after my mediocre adventure with Ramen Tetsukama just down the alley.
http://tokyobelly.blogspot.jp/2012/04/roppongi-hills-ramen-tetsukama-bit.html 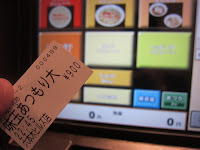 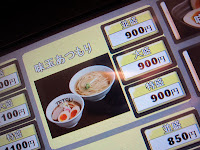 I rarely order Tsuke-men (noodles and soup in separate bowls) but since this place was named "Tsuke-men" I gave it a go.   Went for the 900yen tsukemen with a flavored egg... Normal, Large and Extra Large portion of noodles are all the same price thus the 3 buttons to the right of the picture. 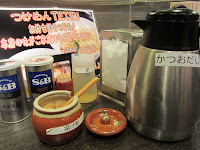 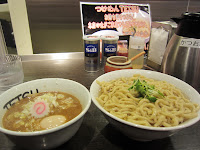 I ordered the "Atsu-Mori" version of the tsuke-men so the noodles were in a hot soup... I'm assuming its the soup used to boil the noodles (flavor of the noodles remain in the soup). 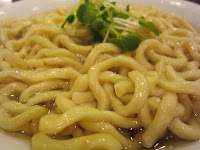 And the noodles!  WOW!!  Thick thick thick!!! I have never seen such chunky chewy noodles like this before... and I thought Jiro Ramen was chunky.   The texture was great and enjoyed eating each string of mochi-mochi noodles~.  I so prefer this to thin ramen noodles. 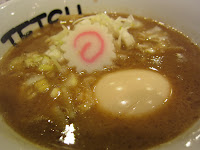 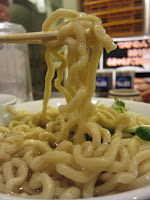 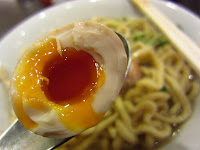 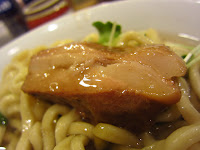 Melty pork... had 2 pieces inside... not so big but the massive portion of noodles kept me full. 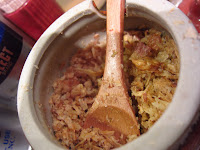 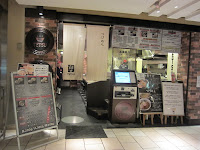 There is counter seating... 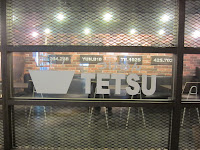 And unusually there is also table seating.  I'm so glad to wander into this shop and I should have known there was some reason for the lines at Tsuke-Men Tetsu.  If you want a solid ramen that will leave you both satisfied and incredibly stuffed (order the Oomori or Tokumori noodles!)

大きな地図で見る
Posted by Steve at 8:41 PM